Plaza I
http://inhumanitytriptych.blogspot.com/
﻿﻿﻿﻿﻿﻿﻿﻿I believe that after the Holocaust we can no longer read biblical narratives as the archetypes of Jewish and human experience. The 'revelations' of the Torah and other biblical books have been supplemented, if not superseded, by the events of the twentieth century. A new “negative revelation” prompts us to reconsider and re-signify the narratives of our biblical heritage. The paintings, “The Expulsion,” “The Sacrifice” and “The Accusation,” together comprising The (In)humanity Triptych reflect my efforts at such resignification. In these paintings I have re-read three biblical narratives, the Expulsion of Adam and Eve from the garden, Noah’s Sacrifice, and Esther's confrontation with Haman,  through the lens of the Holocaust.

The process through which these paintings developed was not consciously planned and directed. I originally set out to paint a standard “Expulsion,” but in the course of my work on the painting Adam and Eve seemed horrified rather than ashamed and an un-willed  “dialog” ensued between myself and the figures. This dialog, which extended into my dreams, resulted in the three paintings as they are presented here.  My own understanding of these paintings continues to develop and I invite discussion about them and their subject matter.﻿﻿

For me, “The Expulsion,” raises many questions, one of which is whether humankind was created just to end up in the ghettos, concentration camps and crematoria. The painting asks for the existential warrant for the creation of humankind, as the biblical figures peer into the future and see the fate of humanity.

A review which discusses this painting appeared in the Jewish Forward in December, 2016:

The Sacrifice - Center Panel of The (In)humanity Triptych

﻿﻿
“The Sacrifice” references God’s destruction of humanity in the biblical narrative of the flood. and human efforts to  arrogate divine destructive power through acts of genocide. In this painting I have have envisioned Noah and his son incinerating the  humans that were destroyed in the flood, and I have marked this act (and, more significantly, the destruction of all humankind) as a prelude to the genocide of the Holocaust. The “Sacrifice” challenges our belief in the goodness of God and humanity , and highlights the rupture in the covenant between them.
Posted by Sandy Drob (Sanford L. Drob) at 3:55 PM 4 comments:

The Accusation - Right Panel of The (In)humanity Triptych

﻿﻿﻿﻿﻿﻿﻿﻿﻿﻿﻿﻿﻿
﻿﻿﻿﻿﻿﻿﻿﻿﻿﻿﻿﻿﻿﻿"The Accusation” raises the question of the responsibility for human atrocities and suffering.
In the Book of Esther, Esther accuses the wicked Haman of plotting to destroy the Jewish people. Here, two prisoners in a European ghetto, dressed in the costumes of Esther and Ahasuerus on Purim, accuse us (the viewer) and point to our personal responsibility for the human suffering brought on by humanity’s inhumanity. Perhaps Esther, by pointing outside the frame of the painting, is also accusing God. I have utilized a triptych, a typically Christian device, for several reasons—as I will later explain the triad has, for me, a specifically Kabbalistic significance. However, I also believe that the Christian biblical narrative must be resignified after the Holocaust. In this triptych I am focusing upon the six million who suffered unspeakable physical, mental and spiritual agonies and had their humanity deconstructed for the simple reason that they were Jews. Thus the painting  “The Sacrifice,” which references  the death of the six million in the crematoria, is in the central position that might normally be occupied by Christ on the Cross. Adam and Eve, are in the place of Mary—we see the suffering of the mother and father of all humankind, as they see their progeny incinerated. Finally, Queen Esther (a Jew) and Ahasuerus (a non-Jew)  call upon us to assume ethical responsibility for human suffering.

I am presently contemplating the significance of horror, compassion and responsibility for the theory and practice of psychology. After completing the paintings I have also considered the apparently different roles of men and women in this sequence. This is a topic worthy of further thought and discussion. 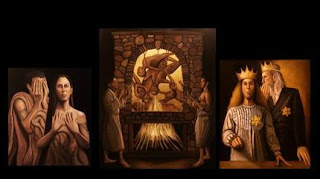 From a Kabbalistic perspective, the paintings traverse the dynamic of Shevirah (rupture), Kellipah (husks of evil) and Tikkun (restoration and redemption).
The Kabbalists regarded the expulsion from Eden as a metaphor for Shevirat ha-Kelim, The Breaking of the Vessels. In this painting, I have re-envisioned the Expulsion from Eden as a prelude to the totality of evil that will befall humankind, culminating in the Holocaust. In the first panel of the triptych (above) Adam and Eve peer into the future and see the destruction of humanity in the generation of the flood, which, sadly, presages the destruction of European Jewry in the 20th century.

In “The Sacrifice” I have depicted my own vision of Noah and his son burning the dead after the recession of the flood. The painting alludes to the God-driven destruction of humanity in the flood, and, of course, to the Shoah. As the story of Noah represents the making of covenant between God and humanity, the Holocaust suggests a rupture in that very covenant, and the highest manifestation of evil in the world. Kabbalistically, it represents the entrapment of divine light in the “husks” of evil, the Kellipot. The light within the crematorium is the fire of divinity that has been turned to abject evil through the acts of man.


The final panel of “The (In)Humanity Triptych represents the possibility for Tikkun ha-Olam, redemption. Here, Holocaust victims in a European ghetto dress up as Esther and Ahasuerus on Purim. They re-enact the scene from The Book Of Esther, where Esther accuses Haman of plotting to exterminate the Jews; only, instead of pointing at a figure within the painting, Esther points at the viewer, as if to accuse us all, and to remind us of our ethical responsibility.